The Grand Lodge of British Freemasons in Germany
(GL BFG) 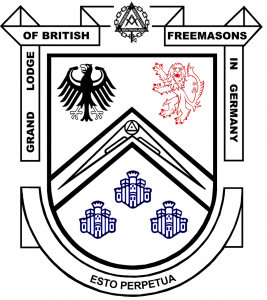 The Rose of Minden Lodge Nr. 918 is one of 18 warranted Lodges that come under The Grand Lodge of British Freemasons in Germany (GL BFG).

This is a Masonic Grand Lodge in Germany working in the English language and following English masonic traditions. It was founded as a District Lodge in 1957 and after various transformations (see below) was eventually recognised as Grand Lodge in 1980. This Grand Lodge is one of the five United Grand Lodges of Germany (VGLvD).

It currently has members from a variety of nations and in addition to the “resident members” in Germany, there are “non-resident members” all over the world. Currently lodges work under the GL BFG, are mainly in North Rhine-Westphalia and Lower Saxony, but are also represented in Hamburg, Munich, Berlin and just recently, Frankfurt.

The GL BFG, like the American Canadian Grand Lodge of Ancient Free & Accepted Masonry (ACGL), was originally a military Masonic organisation for members of the Allied Forces in West Germany and was established as a district of the Grand Lodge AF & AM in 1957.

The Seal of the Grand Land Lodge of the Freemasons Order comprising a Triangle and a Key are combined with the Triangle and Key together which also symbolise the Trowel. The Chain is displayed in three sections each exposing three links and thus symbolising the “Three times Three” common to German Freemasonry.